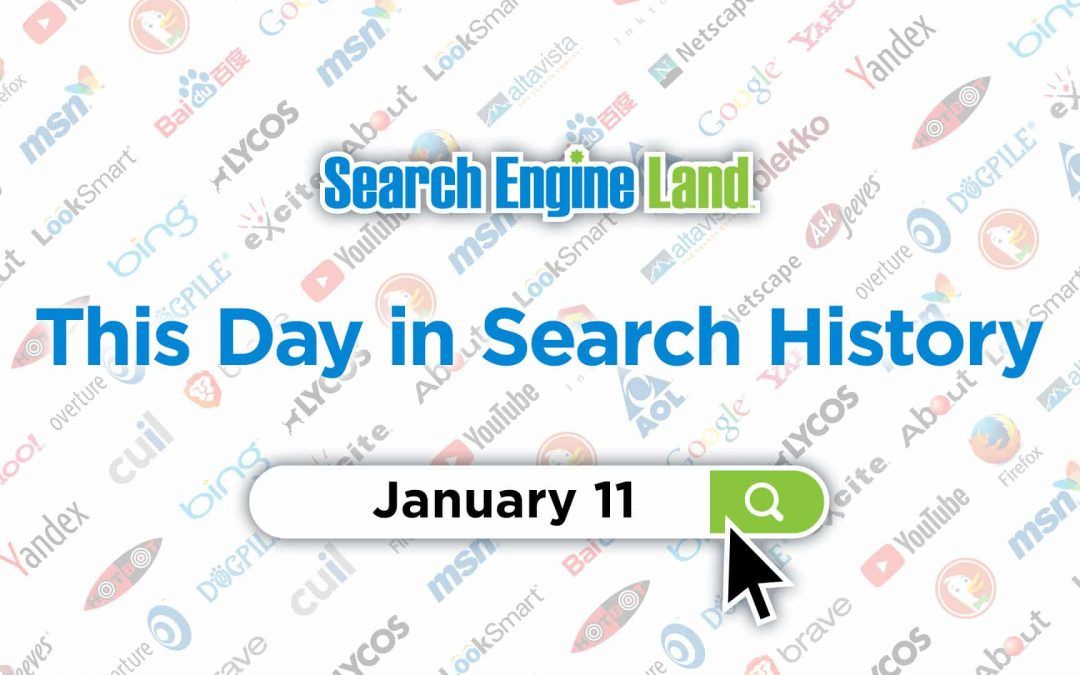 In 2017, Google started rolling out the mobile intrusive interstitials penalty.

In August 2016, Google announced plans to lower the rankings of pages “where content is not easily accessible to a user on the transition from the mobile search results” – and that crackdown would begin on Jan. 10, 2017.

Why did Google do this? They believed this type of ad was “problematic” on mobile devices with smaller screens.

Google explained which types of interstitials were going to be problematic, including:

Read all about it in: Google confirms rolling out the mobile intrusive interstitials penalty yesterday.

2022: This was just a reminder about an update that wasn’t expected to be big.

2021: The updated report gave specific categories and labels for errors and responses.

2021: Numerous advertisers had paused their social media campaigns over the events at the Capitol.

2021: In this installment of Barry Schwartz’s vlog series, he chats with Thune about the early days in the search industry, his role in running Textbroker and more.

Sitelinks tip: Set your sitelink descriptions or Google, Bing Ads can do it dynamically

2019: Adverisers who hadn’t set up manual sitelink descriptions in non-brand campaigns probably wouldn’t have liked what they saw.

What Time Is The Super Bowl? Google & Bing Are Confused

2016: The Google Doodle honored Alice Paul, the American suffragist who played an integral role in getting the 19th Amendment passed, giving women the right to vote, and was the original force behind the Equal Rights Amendment.

Why Asking StumbleUpon To Remove Your Links Is Dumb

2013: StumbleUpon was getting regular requests each week from people asking for it to remove links to their sites. Why? They were worried that being linked to by a popular and long-standing social media sharing site was somehow hurting them with Google.

2013: An image search feature that was often used by bloggers and other content producers returned – and it expanded to image searches on mobile devices.

2013: The latest images culled from the web, showing what people eat at the search engine companies, how they play, who they meet, where they speak, what toys they have, and more.

2012: A closer look at the changes, including how they turn Google+ into an essential social network for any search marketer.

Google “Search Plus” Impact on Local: Limited So Far

2012: Based on an unscientific query survey, the impact seemed to be minor.

2012: Google remained tightlipped about exact numbers, but a spokesperson confirmed that “since launch we’ve more than doubled the number of domestic (i.e., U.S.) routes available in the feature.”

2012: The logo symbolized the study of the earth, from the ocean to the mountain tops.

2011: Google changed its AdWords interface to allow marketers to use a single negative keyword list across multiple campaigns.

2011: With mobile searches growing by leaps and bounds, Google introduced an option on its keyword tool that let marketers find keyword suggestions for mobile devices.

Yahoo-Bing Gaining On Google In Some Paid Search Metrics: Report

2011: The transition led to small drops in click share and spend share, and a larger drop in overall paid search ad impressions for Yahoo-Bing. But, the flip side of that was a gain in revenue-per-click (RPC).

2011: Anyone logged into a Google account would see recent activity from their Hotpot friends in the left-side window.

Off The Radar: Why Airlines On Travel Search Engines Are Going Missing

2011: It was a standoff between online travel agencies and airlines.

2011: Foursquare went after local businesses and major brands with an improved and expanded content section that explained how they could take advantage of Foursquare’s platform.

2011: Google itself was basically a science project developed by its founders, Larry Page and Sergey Brin, way back when.

2010: The company was beefing up Yahoo Labs, hiring a range of social scientists and academics and doing new research

The End of Yahoo Shopping? Company Substantially Outsourcing To PriceGrabber

2010: Merchant listings would now come from PriceGrabber and ecommerce sellers would only be able to get into Yahoo Shopping via PriceGrabber or Yahoo Search (Bing).

2010: Google News marked the article in the “most viewed” section of Fast Flip – go figure!

2010: Links to so many articles offering predictions and resolutions for 2010.

Get A Free Link From Wired

2009: But only until Wired put a robots.txt block on links coming out of the semi-Wikipedia challenger.

2009: The images appeared on the left side of each sponsored result within the directory pages.

2009: How Google’s growth frightened those with vested interests (Viacom, Microsoft), as well as consumer and privacy advocates.

2009: Where he would be asked about the Beacon controversy and the challenge of leveraging the social graph for the benefit of advertisers.

2009: Attributed to the nearly $200 million acquisition of SideStep by competitor Kayak

2009: He would be succeeded in that same role by Juniper Networks’ COO Stephen Elop.

2009: The latest images culled from the web, showing what people eat at the search engine companies, how they play, who they meet, where they speak, what toys they have, and more.

2007: PageRank updates, supplemental listings, filetype command changes, lost home pages in country-specific results, an update on the disappearing sex blogs, concerns that CSS is being spidered to detect hidden text, duplicate content worries, the Minus 30 penalty and what to do if Google thinks you are a malware site.

More Rounds In The “Is SEO Overrated” Debate

2007: On his vision and his role within both Ask and parent company IAC.

2007: It provided access to search engines in the areas of Web, News, Images, Blogs and Jobs. It displayed results from one search engine, searchers click on another engine tab and it displays results from that one and so on.

SEMPO Board Of Directors Nominations Open