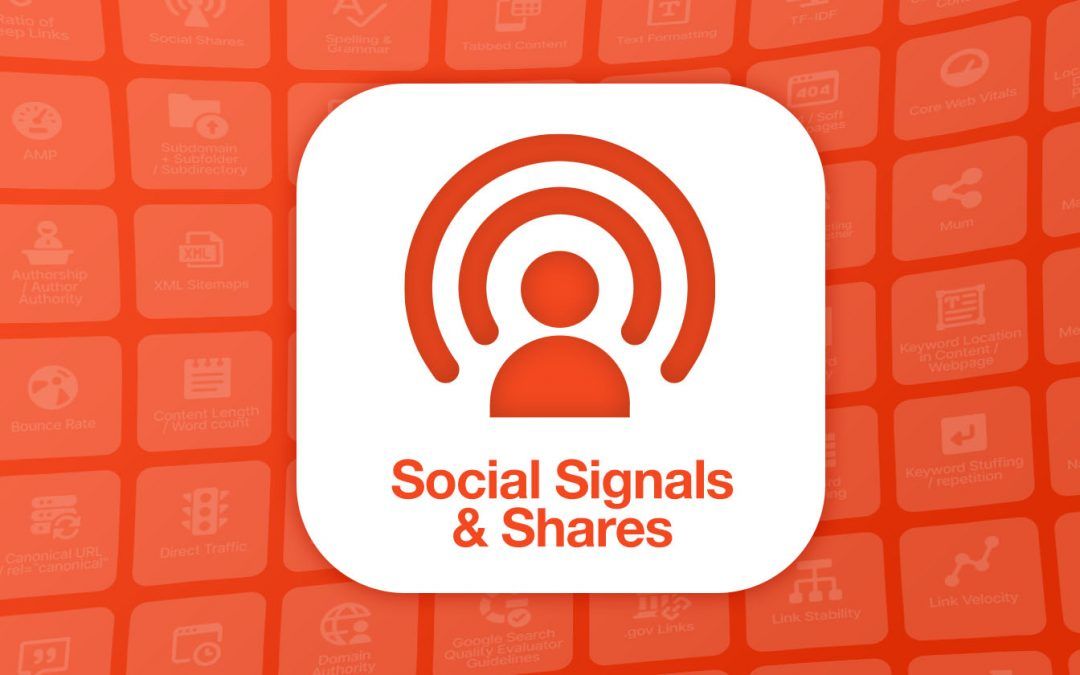 In a world of ever-evolving social networks and platforms, can engagement on one social network over another help you get better visibility in Google search engine results?

Let’s explore social signals as a Google ranking factor to determine their effect on search rankings.

The Claim: Social Signals Are A Ranking Factor

Here are some examples of social signals.

The Evidence For Social Signals As A Ranking Factor

Google does seem to care about social media. In the Search Engine Optimization (SEO) Starter Guide, Google acknowledges that compelling content gets shared, and organic buzz will build your website’s reputation.

“Creating compelling and useful content will likely influence your website more than any of the other factors discussed here. Users know good content when they see it and will likely want to direct other users to it. This could be through blog posts, social media services, email, forums, or other means.

Organic or word-of-mouth buzz is what helps build your site’s reputation with both users and Google, and it rarely comes without quality content.”

“Sites built around user interaction and sharing have made it easier to match interested groups of people up with relevant content.”

“Social analytics provides you with the tools to measure the impact of social. You can identify high value networks and content, track on-site and off-site user interaction with your content, and tie it all back to your bottom line revenue through goals and conversions.”

Google also offers advice for anyone with a Knowledge Graph panel on updating their information, including social profiles.

While Google does seem to place importance on social profiles, it doesn’t necessarily mean that social signals can lead to better rankings.

The only catch would be links shared on profiles that aren’t public. If Google can’t fetch or crawl the profile page, it can’t see the link.

Cutts answered that although they didn’t use social signals for rankings in the past, Google had implemented social links as ranking signals at the time of the video. The link to the article was included with the video from Google Search Central for more details.

In 2013, Google filed a patent that references searching content of prominent users of social networks. In one section, the patent mentions how interactions by members of a user’s social graph can be used as social signals.

While the patent shows Google’s interest in boosting resources in search results based on social signals, it doesn’t mean they applied it to the algorithm.

The Evidence Against Social Signals As A Ranking Factor

“As Google continues to add social signals to the algorithm, how do you separate simple popularity from true authority?”

In his response, he says there is an “assumption” in the first part of his question, adding social signals to the algorithm, which he dismisses.

In 2015, John Mueller, a search advocate at Google, said that social signals do not directly help in organic rankings.

Links in most social posts are nofollowed. They won’t help with organic rankings. However, the social posts that link to your website could appear in search results.

In 2016, Mueller received a tweet asking if social media tags do any good for on-page SEO. His response:

“No, I’d use links to social media as a way to add value to users, not in the hope that they improve rankings.”

In 2017, Gary Illyes, Chief of Sunshine and Happiness at Google, mentioned social media twice in a link discussion. First:

“And that’s where social media comes handy. It’s not because SEs will rank you better, that’s BS, but because you market your content”

“Also, for the record, PageRank wise most social media links count as much as a single drop in an ocean.”

In 2019, Mueller joked in response to a guide on Buy TikTok Verification Badge:

In 2021, Mueller joked in response to the number of likes a particular tweet was receiving:

“Sorry, we don’t use likes as a ranking factor.”

Later in August 2021, Mueller was asked if clicks via emails could impact rankings. He replied:

“No effect on SEO. Like ads, like social media. It’s good to have multiple separate sources of traffic to your website, and not everything needs to have an SEO effect.”

“If I give you advice on Buy Twitter Verification Badge which helps improve your website’s visibility in search, would that be an indirect effect of social signals on SEO?”

The joking response is a clue to their sentiment about social signals. They don’t put much stock in them.

Check out our verdicts on other ranking factors in the Ranking Factors: Fact Or Fiction ebook.

Social Signals As A Ranking Factor: Our Verdict

It’s a bit confusing whether social signals affect organic search rankings. Between 2010 and 2014, Google may have experimented with social signals in search results.

Plus, there are scenarios where social media can help your SEO efforts. While social signals may not be a ranking factor, social profiles and links can affect your brand’s appearance in search results.

Ultimately, it seems that Google may have used social signals in the past to create better results for users. But now, social signals seem to be a thing of Google’s past.